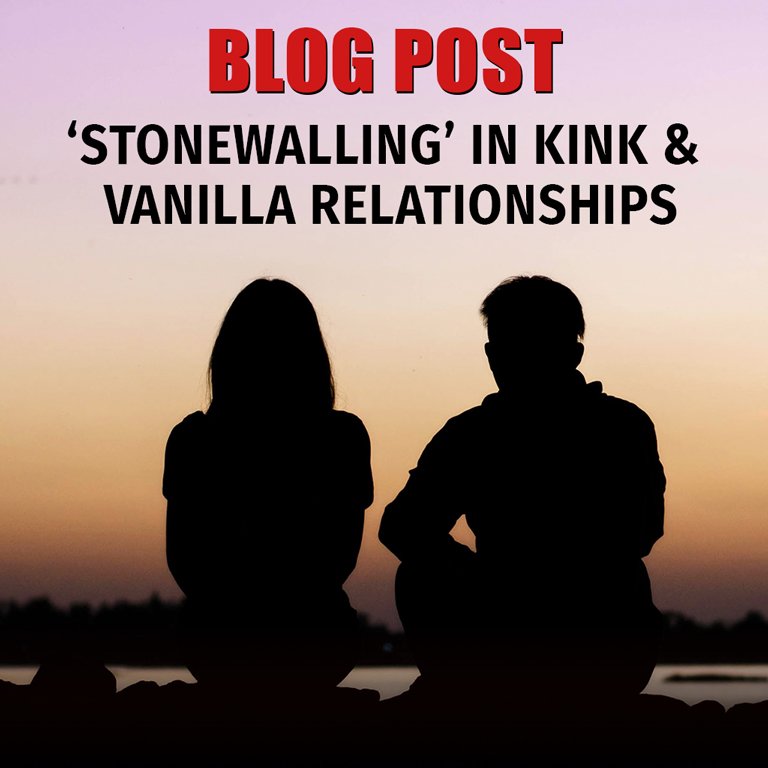 People talk about gas-lighting a lot, and an aspect of gas-lighting came up the other day when I was working with a client.

But instead of being gaslighted in the traditional sense, they were being ‘stonewalled’.

Stonewalling is one of the ‘Four Horseman’ (ie negative factors that are the most destructive in a relationship with the other 3 being criticism, contempt, and defensiveness). This ‘4 Horsemen’ analogy/model comes directly from The Gottman Method and is the work of world-renowned relationship specialist, Dr. John Gottman. As I’m a big fan of science-based approaches, his work and models resonate with me as they stem from conducting 40 years of breakthrough research with thousands of couples. It’s worth checking out.

Dr. Gottman identified that these 4 negative factors that are the most destructive and found less frequently in ‘healthy’ relationships. John Gottman called them the ‘Four Horseman’, referring to the biblical image of the four horsemen of the Apocalypse and he says he can see what relationships would work/not work by watching a couple in one session.

He identified the following as those four:

Criticism.
Criticising your partner implies that you think there is something wrong with them. Saying things like ‘You never’ or ‘You always’ is like a global attack. It is better to make a direct complaint about something specific.

Defensiveness.
Most people defend themselves when they feel that they are being attacked and this can escalate the scale of the disagreement. Instead, listen to the complaint and accept some shared responsibility for it.

Contempt.
Treating your partner as inferior or mocking them, alongside stonewalling, is the most serious of the four horsemen – especially within power exchange relationships as we play with humiliation and degradation consciously. This can cause deep hurt and resentment which can be hard to heal, but which with therapy can be overcome.

And the final one and the focus of this article…

Stonewalling.
This can involve just refusing to respond, talk, or actually walking out on the discussion.

With stonewalling, one party just won’t communicate, won’t acknowledge an issue, won’t cooperate or discuss, won’t deal with the elephant in the room, and may even say ‘Take it or leave it’ or ‘IDGAF’. If the person chooses to stay they are still stonewalled forever until their partner wants to change or if they want to leave the relationship.

Why Is Stonewalling Especially Threatening To Power Exchange Relationships?

There are added expectations that come with power exchange relationships (especially regarding how the people involved will relate) as they are (usually) formulated on a lot of communication. Communication is paramount in the lifestyle as risk, informed consent, and power exchange dynamics are solely based on communication, so, for kinksters within D/s & M/s (and even vanilla relationships) stonewalling is deeply damaging.

When communication is withdrawn without explanation by someone who you have consciously declared that communication is the highest priority, it is even more confusing and hurtful. Also, there may be a huge risk to emotional and potentially physical safety.

Why Does It Happen?

For many, it’s a destructive and negative form of communication that destroys intimacy and creates withdrawal and separation almost instantaneously.

Some may call it the silent treatment which it can be however it is a little deeper.

People can also stonewall as an attempt by a partner to dominate the relationship by not addressing any issues so the aim is to prevent you from taking any action – this is a big red flag when it comes to ‘intent’. Some people may stonewall to hurt the person, believe they should know as it is the other person’s issue or that they should be a telepath.

For some, it is a learned response to cope with emotional and difficult issues. They do not want to control or manipulate but instead use it (subconsciously) as a way to protect themselves from feelings.

Some people can’t express what they are feeling, it hurts too much and maybe the family environment taught them to suck it up and do not share or were received negatively if they did. Maybe they went to boarding school, were in the armed forces, or maybe the person has complex trauma and/or wounding – there are many reasons underneath it. If so sharing would cause anxiety so avoidance above all else is preferable and the system they are used to.

If people have been alone and aren’t used to discuss emotions or share or when someone is unsure of what they are feeling so it seems easier to say nothing. This also happens for relationships that have fallen into bad habits and complacency.

How Does It Feel?

If you are being stonewalled you will feel either stuck, hurt, bewildered, angry, confused, and frustrated – or all of the above. You want to know or indeed do know what is wrong and communicate that but are unable to get an answer – this is abhorrent and can be considered a form of emotional abuse and is often used as a form of control (and in this case, an unhealthy form of control).

Devaluation can quickly occur leading to helplessness, worthlessness, and powerlessness, and questioning your own sanity (hello gas-lighting, even if not the intent). This is all fuel for the formation of unhealthy self-limiting beliefs.

What To Look For?

– That question you asked in a text isn’t answered, even when you ask again and it has been received and read for the second time. This is similar to ghosting (which still is cruel, disrespectful, and immature – will be the topic for an upcoming article) but cuts deeper as the person doing the stonewalling is part of your emotional life and not just someone on a screen.

– If you share a feeling based on your lived experiences with someone and they ignore you and don’t respond to any questions. And sometimes this isn’t a one-off – it happens again and again, over time and in some cases, for years.

– When you point out they’re stonewalling, they blame you.

– If you start a serious conversation they walk away or start doing something else to get out of it, especially a job that is needed or that you have asked for ages and state again, your fault as they’re doing what you want.

– They can make fun of you and patronise what you say when you speak and call it banter and healthy, say it is fun and that you are ‘too serious’ and or ‘sensitive’ and/or talk too much.

– They will dismiss your concerns as if they are unimportant, dramatic, irrelevant.

N.B To walk away to avoid specific situations where there is an intense amount of anger that is likely to blow up is good and needed. These situations are NOT the same as stonewalling.

In the event of a major blow-up, it can be stated, clarified and then communication happens at some point in the future where it’s agreed to. I repeat, this NOT the same as silence and pretending nothing happened.

And The Person Doing The Stonewalling?

The person doing it doesn’t gain anything either! Denial of intimacy and the silent treatment may be appealing, however, it doesn’t make us happy in the medium to long-term when you take an honest look at it.

One important thing to note is that even though it’s a form of manipulative behavior and unhealthy, storming out and other stonewalling behaviors of ignoring, etc don’t always make it abusive, as that person may need some time out and to collect their emotions.

If you, the reader is the kind of person who does this, it remains destructive if you don’t come back and share, talk, and sort things out. At the VERY minimum, tell your partner you need some time out to process your thoughts and emotions and then make good on the promise to come back and talk.

The ability to collaborate with each other gets lost and the person being stonewalled will adapt and appease instead of deal with what is really going on. This is literally poison to a relationship.

What To Do About It?

If you choose to stay in a relationship where this is happening, call it for what it is and look at how to stay and move forward – together. That being said, you shouldn’t avoid calling out this destructive behaviour even if it isn’t abusive as you will have to act eventually, even with an ultimatum to your partner.

We all owe it to our partners to be present in this way and if you are on the receiving end of it, to become very aware of what is happening and why. Prioritise the attempts to understand the intent behind the stonewalling to the best of your ability.

If both parties want a healthy relationship, it is a joint responsibility of what is happening and why, and the action needed. If the stonewaller stonewalls this process, it is sadly, not much choice left in the matter and you will seriously need to consider leaving the relationship, no matter how painful.

In short: IMPROVE YOUR COMMUNICATION SKILLS. Improving communication skills is down to ALL people in a relationship as relationships are a 2-way street – It’s not fucking rocket science.

We are accountable for boundaries when it comes to taking and giving. ‘What you allow will continue’ and learning that can be tough. We live and learn (myself included), just some are faster than others.

If you need help in this area of life, contact me.

The benefits of seeing a professional Dominant