This article is written for women in mind, but that being said, men can get a lot out of it too.

Before getting started, it helps to understand what an orgasm actually is. An orgasm, according to Wikipedia, is the sudden discharge of accumulated sexual excitement during the sexual response cycle, resulting in rhythmic muscular contractions in the pelvic region characterised by sexual pleasure.

Besides providing a physical release, it’s also an emotional one—allowing you to feel closer to your partner or simply de-stress after a tough day. The orgasm is one of the greatest pleasures one can experience in life, and while some women never have an orgasm, others have been equipped with the ability to have many different types and multiple orgasms during one sex session. Men can have also multiple during one sex session where their orgasm is separate to ejaculation, but, that requires a lot of intense training and conditioning and will be the focus of another article.

Societal norms, the media, and pornography greatly influence how we all view women’s orgasms, but, the research indicates what I’ve experienced first hand – healthy sexual self-esteem and good communication are the most important factors in women’s sexual satisfaction, let alone achieving orgasm.

The social expectations surrounding women’s orgasms can be quite distressing to women who don’t always experience them. And when depictions of sex in the media are taken into consideration, the gap between expectation and reality widens even further.

Enjoying orgasms is essentially a basic human instinct. We are hard-wired to believe that orgasm = good. But what if I told you that you weren’t having the variety of orgasms that you could be having?

But what if I told you there were actually twelve different types of orgasm you can have?

How many have you had – and how many would you like to try?

i hope this guide shines a light on the orgasm, and more so, the amazing orgasmic potential of the whole female mind and body.

Refer to the picture below for exact locations of areas specified 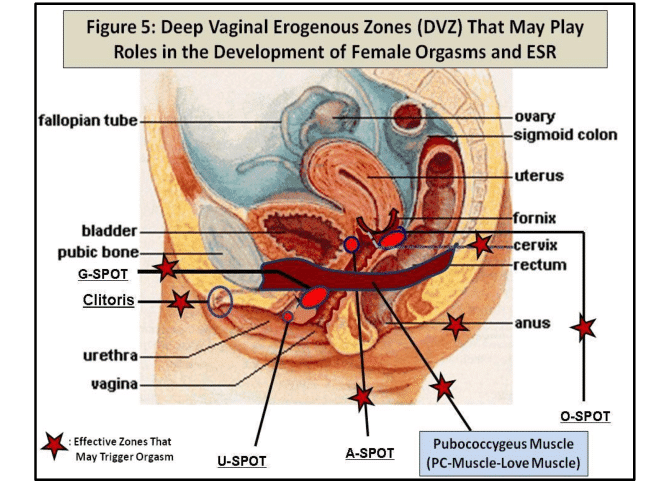 Food for thought – Is orgasm really the most important thing?

In my opinion, it’s not. In fact, being so focussed on the end goal of an orgasm can ironically, possibly make it harder to finish and make the overall sex a lot less fun. In order to have pleasurable sex, we need to take the goals out of sex so that you can start to feel sensation and connection and feel the pleasure in our whole body rather than just focussing on the orgasm at the end.

Even though a quickie with a big finish can be amazing every now and then, not all sex has to be fast and furious. If you take your time and make your partner’s pleasure your mission without worrying about the “outcome,” you can have hotter, more fulfilling sex — and get to know each other’s likes, dislikes, kinks, and more along the way.

However you get aroused is how you’re going to enjoy playtime the most, so be sure to focus on just that, while also focusing on your partner and their pleasure. Take note of each other’s sexual preferences and even if you aren’t achieving an orgasm, learn the diverse ways you both get aroused and ignore the pressure to have a big finish.

Enjoy the journey, don’t worry about the destination – right? Be gentle, affectionate and heat things up, but enjoy a slower and more relaxed experience with no anxiety or pressure for either of you to achieve climax.

I wish you many orgasms while also enjoying the sex that happens before and after it – Enjoy the journey!

I have a number of programs and processes to help unlock your orgasmic potential – Get in touch with me to discuss them in detail and work out what is best for you!

I look forward to helping you on your journey xo

'Thank you so much for helping me explore my body and what it is capable of! Every woman should discover the ways she can have more orgasms and more pleasure. My sex life has improved so much since working together. I now experience waves of pleasure and multiple different orgasms. I seriously can't thank you enough!'

An excellent and informative article written by Mistress Ava!

8 Ways to Make Desire Last in a Long-Term Relationship